At Whatever Front  is a full-length collection, blending lyricism and narrative, formalism and free verse, to ask the simple questions we’ve not yet been able to answer. 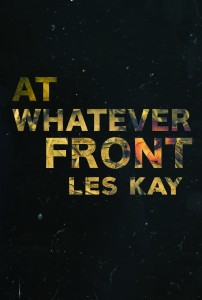 “Les Kay’s beautiful and formally diverse first collection reads as a love letter to the working class, full of steel and wood, mortar and chrome. In his skilled hands, drudgery becomes liturgy, the burdens of poverty become cascading light, and fists become ‘flowers that we can’t open.'”

“I have followed for Les Kay’s poems for years with pleasure, taking particular delight in poems where we find someone caught in a peculiar situation, poems like ‘Persephone in South Eastern Ohio, ‘ or ‘By Her Last Tour in Kandahar, ‘ and the fine villanelle, ‘Methamphetamines.'”

“Les Kay’s first full-length collection, At Whatever Front, celebrates the beauty of lives ‘bountiful in their loss.’ The poems are lively, moving, rhythmically tight, and often sweeping, with a kind of lyrical activism (or activist lyricism). Kay summons up marvels of sonic architecture and imagistic brilliance, as in a one-sentence poem, ‘That First Summer Job, ‘ which presents a scene of boys chasing cottonmouths ‘deep into the creeks that / split the public parks, left / our chrome bicycles prone / in clay mud along the oak- / lined banks.’ A mixture of the personal and the political is central to his writing, and some of the ‘fronts’ here represent military positions, from the Crusades to Vietnam and ‘ceaseless war’ in the Middle East. But other fronts are more intimate, people’s brave faces in the midst of a Great Recession. The book begins with a poem steeped in the visceral process of a father cutting cardboard in a factory and ends with a wrenching poem about a married couple’s losses of jobs and a ‘son / that never was, ‘ a powerful gut-punch of what ifs. By looking so observantly and compassionately at suffering–the ‘pending threats, ‘ a ‘fractured foundation, ‘ and living ‘at the edge of our knowledge’–Kay breaks through on every front.”